Two rare contemporary subjects for this well known British artist best known for the Dickens illustrations he signed as "Kyd". Here the signature is of his own name, both subjects drawn with a Dickensian flair for characterization. The hikers in their shorts, one on a bike, are a gung-ho family of definitely intellectual and perhaps even left-wing persuasion being observed with great amusement by a farmer type behind the hedge. Clarke certainly finds them amusing as well: he has given them all a definite family resemblance. Dad's specs, cigarette, and hairy legs are noted, and the mother and daughter are pretty hearty and sporty and serious. But the humor is gently humane.

By contrast, the characters in the boxing scene are four recognizably rough types from the world of the boxing ring. They have tried to patch their battered pug but he may not last another round. We love the addition of a black man to the group. It's a vivid and telling snapshot of the sport, clear eyed yet compassionate.

We are delighted to have this rare example of Clarke's takes on the world he observed around him towards the end of a long life, the world of Britain between the wars. 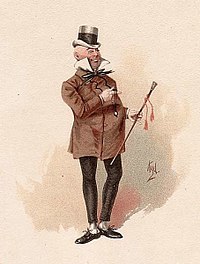